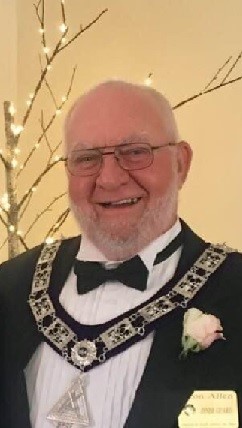 West Gardiner- Leon E Allen Jr, 73 of West Gardiner passed away at MaineGeneral Medical Center on April 8 with his daughters Vicki Rodrigue and Ann-Marie Pelletier by his side.

He was born in Gardiner, ME on Feb 15, 1948 to Leon E Allen Sr. and Geneva (Peakall) (Allen) Flewelling.  He graduated Gardner Area High School in 1966. He retired from the State of Maine, Department of Transportation and his last retirement was from McGee Construction.

He was a 25 Year member of the Valley of Augusta Scottish Rite and received his 32nd Degree. He was a Master Mason of the Morning Star Lodge #0041 and affiliate of the Hermon Lodge #0032. He held officer positions from 1994 to present which included Junior Deacon, Senior Deacon, Junior Warden, Senior Warden, Master; Morning Star Lodge; 11th District, District Education Representative; 11th District, Marshal, District Deputy Grand Master; 11th District, Chaplain and Finance Committee. He received the Masonic Ambassador Award, 20 Year Service Pin and 25 Year Service Pin. He was in the Shrine from 1995-2002.

He was also a member of The American Legion Post 132 and a member of the Augusta Elks Lodge #964. He was a parishioner of St. Michael’s Parish.

He was a devoted husband to Dorothy Allen for 34 years. She was his high school sweetheart and was so happy to have found each other again after their previous marriages.

Leon cherished his wife and the life they had together, ensuring that she was taken care of above all else.

His heart was so full for his family along with everyone who loved him as their family. Besides family, he was most passionate about cars, racing and camp on P-Ridge. He enjoyed so many things in his lifetime and every opportunity he was awarded with a smile on his face.

He owned and operated Greenhouses for several years in West Gardiner. He was an avid race car driver. He loved building old cars and was always rebuilding his dragster so he could be the fastest “Gassah Guy” at Winterport Speedway.

He enjoyed fishing, hunting, gardening, making maple syrup, camping, entertaining his family and friends, and the friends he referred to as his extended family at camp on Pleasant Ridge Plantation. Our family would like to express gratitude to the Kennedy Family, including Shayne & Tonya Mullin for their love for Leon.

He was the life of every gathering. He liked to dance. He enjoyed meeting new friends. He loved sitting around campfires reminiscing and his “little ditty’s” that some of us would shake our heads and say, “what does that even mean”?

Our loving husband, father, brother, grandfather and friend will be sadly missed but never forgotten. We will cherish our memories forever and thank God for allowing us to have him in our lives.

A Mass of Christian Burial will be held Tuesday, April 20 at 11 a.m. at St. Joseph’s Catholic Church in Gardiner. A private graveside service will be held after the mass at the Maine Veteran’s Memorial Cemetery. A Celebration of Life will be at the Augusta Elks Lodge #964 at 3 p.m.

In lieu of flowers and in honor of Leon, please consider donating to one of his passions noted above. Remember to smile, hug your loved ones and live life to the fullest. “Giddy up Go”