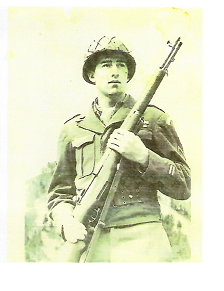 RICHMOND-Frederick Brewer Douglass Jr, 95, passed away peacefully May 12, 2021 at his home on Lancaster Road in Richmond.

He was born in Dover New Hampshire on December 3, 1925, the son of Minnie and Frederick Brewer Douglass Sr.

He worked at Bath Iron Works in the paint shop until he went in the Army at the age of 18. He fought in three different battles in WWII. He came back and worked another job planting glads before he went back to work at BIW as an electrician until he retired at age 62 after 37 years.

He built his own home on Lancaster Road in 1954. He was always busy making new projects for himself, family, and friends. If someone needed something made, they would come to him and he would figure out how to do it.

He was an avid hunter, fisherman, and outdoorsman. He loved camping with family and friends. He had four moose permits in his life and got a moose with each, the last one was when he was 90.

He always had a huge, beautiful garden and fed his family out of it and there was always extra that he gave to friends and neighbors. He enjoyed many cookouts with his extended family and friends. He loved playing cribbage and dominoes and was still playing until about a week before he passed.

He is survived by two sisters; Bessie Boulay and Hazel Hinkley of Bowdoinham. Two daughters; Beth and Alan Varney of Bowdoinham and Rebecca Blake and Joe Baeli of Richmond. A son; Glenn and Lynn Douglass of Turner; many nieces, nephews, cousins, and friends.

He was predeceased by his parents, his wife of 54 years, three sisters, and his son David.

A service will be held at Gracelawn Memorial Park, on Friday, June 4th at 1PM.