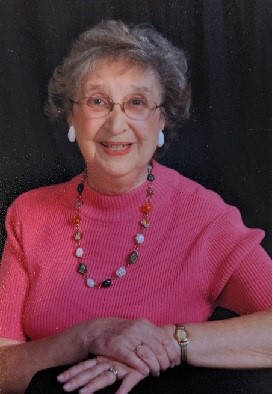 Phyllis passed away peacefully at home with family on October 3, 2021 after a happy, well-lived life.  She was born April 21, 1929 in Gardiner, the daughter of Richard and Gertrude (Moore) Strout of Richmond.

She was predeceased by her parents; two brothers, Ralph and Richard; and her beloved husband, Robert E. Pushard, Sr.

After graduating from Richmond High School in 1946, Phyllis began a 40-year career with New England Telephone, retiring in 1986.  She was a proud member of the DAR, the Telephone Pioneers, and the Maine Troop Greeters, and she greatly enjoyed Bob’s years as a Shriner in the Anah Mini Bike Unit.  She and Bob were avid RVers in their retirement years, touring the country and experiencing many adventures with their friends.  She was also a member of the Silver Saints at Crosspoint Church in Bangor.

She is survived by her children, Bob and Diane Pushard of Dedham, and Richard Pushard of Bar Harbor; her grandchildren, Rob and Beth Pushard of Lacey, Washington, and Jim and Jill Pushard of Eddington; her great-grandchildren, Lena and Baxter; her niece, Amy Strout Hogan of Brunswick; her “Third Son”, Richard Rackliffe and his wife, Christine, of Bangor; and many special friends and lunch companions including Carolyn, Clayton, and Pearl.

Phyllis and her family would like to express heartfelt appreciation to the medical staff at St. Joseph Health Care, the wonderful providers at St Joseph Hospice,  the folks at the Anemia Center at Northern Light Healthcare, and the pastoral team at Crosspoint Church.

A family interment will be held in Richmond at a later date.

Memorial contributions can be made to the Shriners Hospital for Children, 1404 Broadway, Bangor, Maine 04401.