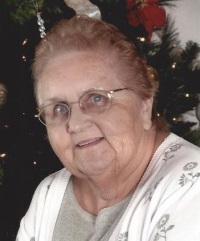 W. GARDINER – Pauline A. Bodge, 82, of West Gardiner and longtime resident of Richmond, passed away on Sunday February 14, 2016, with her family by her side.  She was born on March 12, 1933 in Campton, NH the daughter of Hiram and Arlene (Wilson) Smith.

Pauline spent most of her life in Richmond and attended Richmond schools.  On November 10, 1954 she married Robert Bodge Sr and together they settled in Richmond where they raised their six children.

Pauline was a member of the Richmond Senior Citizen Group, as well as the Dresden-Richmond United Methodist Church.

She loved to knit, crochet, make various crafts, and take trips to the casino.  Pauline very much enjoyed spending time with her many friends, especially her lifelong friend of 70 years, Rita Hanning.  For over 20 years she and her longtime friend Joyce Pinkham happily worked together traveling to different towns and homes demonstrating toys for Friendly Home Parties.   Above all else her number one enjoyment was spending time with family, whether it was camping trips to Green Valley Campground in Vassalboro, trips to Florida with her late husband, Robert, or never missing Labor Day at the Windsor Fair as a family.

Pauline worked for Lipman Poultry in Augusta for a short time, the woolen mill in Richmond, and Sir-gal footwear in Bowdoinham.

She was predeceased by her husband, Robert Bodge Sr in 2007, her parents, Hiram and Arlene, a brother, Leroy Smith, a sister, Elaine Mullane, a son-in-law, Ronald C. Sutter Sr also known as “Chick”, and a grandson, Ronald C. Sutter Jr.

The family would like to express thanks and gratitude to the staff at Marshwood Rehabilitation Center, as well as the Central Maine Medical Center hospice and nursing staff.  Both of these Lewiston based facilities provided exceptional care and treatment for Pauline.  Their hospitality and kindness to the family was a great comfort during this difficult time.

A time of Visitation will be held on Thursday February 18, 2016 from 2pm to 4pm and 6pm to 8pm at Kincer Funeral Home, 130 Pleasant St. in Richmond.  A funeral service will take place the following day, Friday February 19, at 1pm, also at Kincer Funeral Home, with Pastor James Wiley officiating.  A committal service will take place in the spring at Evergreen Cemetery in Richmond.

In lieu of flowers donations may be made in Pauline’s memory to the Richmond Senior Citizen Group, c/o Connie Smith, Box 280 Langdon Road, Richmond, Maine 04357.