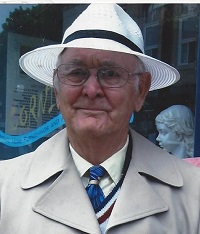 Albert lived in Deer Isle as a young boy before leaving school to work on a farm in Auburn.  He later moved to Gardiner where he worked for Commonwealth Shoe Shop, Bates Mill, and Carleton Woolen Mill.  In 1972 he met Elizabeth Russell while walking through the Common in Gardiner.  Only a few days later he asked her if she would marry him.  She said yes and they were married May 31, 1972 at the Merrill Memorial Chapel in Gardiner, and so began 42 years of a beautiful partnership.  Albert helped Elizabeth in many ways, and she helped him.  They worked together on everything from cooking to attending the many social events going on in Gardiner.  Albert was very active in the Gardiner community.  Being quite social and engaging, he was often seen walking downtown and never missed an event in town.  He became quite well known and prominent in the community.  On June 5, 2013, Albert and Elizabeth were the recipients of the Gardiner Heart & Soul: Heart and Soulmate award for being such a vital part of the community.

Albert was kind, generous, and had an incredible memory for details and people.  He often planned ahead for special occasions, and was always thoughtful.  He enjoyed Christian music and concerts and enjoyed playing a little music in the evening after dinner while home with Elizabeth.  He was a member of the Gardiner Free Methodist Church.

He was predeceased by his parents, Earl and Ruth Conary, and a sister, Margaret Black.

A Memorial Service will be held on Sunday, October 2, 2016 at 2 p.m. at the Gardiner Free Methodist Church.

In lieu of flowers donations may be made in his memory to the Food For Thought program at 134 Highland Ave, Gardiner, ME 04345.