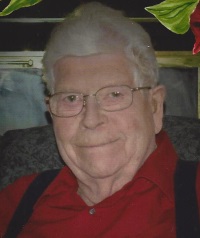 He was born June 24, 1921 in Poland, the son of Eugene R. Ridley and Ruby Everett Davis.  He attended schools in Mechanic Falls and Oxford.

On Aug. 28, 1942, he married Elizabeth Madiline Twitchell.  He served in the U.S. Air Force during World War II in the Pacific Theater. Afterward, he worked as a carpenter and for Robinson Mfg. woolen mill in Oxford.

He was a member of the Veterans’ of Foreign Wars and the Oxford Advent Christian Church.  His hobbies included wood carving, gardening and playing guitar.

He is survived by his brother, Malcolm Ridley of Nobleboro, and 33 nephews and nieces. He was predeceased by his wife; one brother, Chester Ridley; and three sisters, Beulah Kimball, Hertha Kimball, and Glenice Tarbox.

At his request, there will be no funeral service.  Burial will be at the family lot at Gracelawn Memorial Park, 980 Turner St. Auburn.